The Chess Game against Alzheimer’s 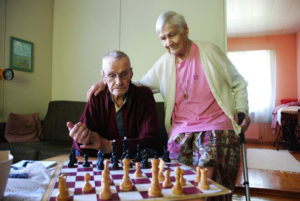 Vilho and Eine Lifländer have lived in the same house in Imatra since 1960.

Chess with its black-and-white chequered board and 32 pieces will soon be the only thing that the 94-year-old war veteran Vilho Lifländer can remember from his colourful life.

I can hear my opponent on the other side of the board smacking his lips and quietly mumbling to himself.

I opened the chess.com website for the first time last autumn. It provides a convenient way to play against others on the internet and the analysis of games soon became a pleasant pastime. At that time, I did not really think that the following summer I would end up face-to-face with such a prestigious opponent.

The person sitting firmly on the sofa opposite me is Vilho Lifländer. He was a founder of the Imatra Chess Club when it was established in 1948. In 1954, he became the 51st person to be awarded the title of National Master in Finland.

Vilho advances his rook and I am lost. “Seems like you haven’t played much!” he exclaims loudly. Taking into account the difference in playing strength, the defeat does not matter, but I was struck that Vilho was able to put the pieces back into the correct starting position.

He has had Alzheimer’s disease for many years. It was first discovered a few years ago when he did not return home from the chess club. His wife Eine called the police who eventually found him. He had got lost whilst driving home and had no idea where he was.

“What happens nowadays is that I make coffee and we drink it together. After an hour he has forgotten and he asks me to make that coffee again” Eine says. The Lifländers have been married for 69 years. Today Eine is Vilho’s full-time carer.

“I always wonder how it is possible that he is still able to play”.

I have the same thought. “Let’s play another game” I write in capital letters onto my notebook and show it to Vilho. He nods.

Vilho is a war veteran from the Continuation War against the Soviet Union. In between the trench warfare, playing chess was considered an excellent way of passing the time and its secrets were learned by most Finns on the front line.

As a memento he still carries grenade shrapnel in his neck, too close to the brain to be removed. During a Soviet swarm, Lifländer threw a satchel charge and was caught by the explosion. He lost hearing for several weeks, and the injury led to his eventually becoming totally deaf. All communication to him is written, including interview questions via a notepad.

Vilho is is a man of few words partly because of his modesty and partly because he has memory gaps stretching for years. However, he is able to remind me several times of my modest chess skills. Curiously, when the game restarts, he seems to remember huge amounts – thousands of previous moves, positions and games have been so deeply embedded into his long term memory that dementia has not penetrated.

Vilho may no longer be able to navigate to the postbox on his drive but his chess skills he will take into the grave. Across the history of culture there are several examples of a human playing against fate. If Vilho played as the Knight in Ingmar Bergman’s masterpiece (the Seventh Seal) he would probably beat the Grim Reaper with ease.

In our game, I unwittingly make a mistake and Vilho shakes his head. A quick checkmate. After my coffee I leave and tell him I have to practise before our next encounter.

“Yes indeed” Vilho guffaws, “you have probably not played much!