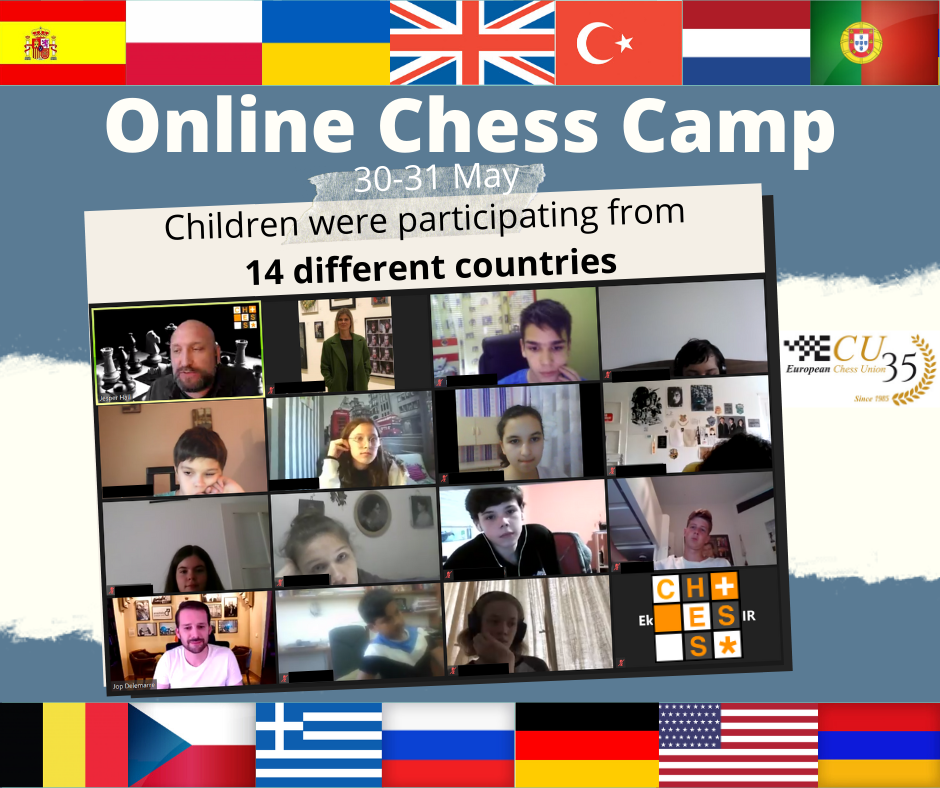 First Rank is a fortnightly term-time newsletter for everyone interested in chess for education. In this newsletter, we report on an early summer online chess camp and we continue our series on chess in Spain by taking a look at qualifications for sports trainers – which includes chess! You’ll find some new features of Lichess and of course, there is an anecdote, a tactical (but slightly different) exercise and the training course calendar.

On May 30-31 ChessPlus, in conjunction with the European Chess Union, offered an online camp for children aged 9-16 to develop their chess with two of the top trainers in Europe, Jesper Hall and Jop Delemarre. The intensive two-day camp was successful on all measures – the children were happy, they learned a lot and got to play against one of the greatest players in the world, Judit Polgár. These exceptional 34 children from 14 countries were divided into two sections: promising (up to 1600 ELO) and talented (up to 2300 ELO). They had lectures, exercises, practice games and a masterclass. The children included the winners of the age group sections both boys and girls from the European junior online championships. The standard was very high and no doubt future champions will emerge from the group.

The format worked so well we plan new camps at the end of June. Pre-register.

Pep Suárez, a leader of chess education in Spain explains the structure of teacher training within the Spanish Chess Federation (FEDA).

Chess is taught as an official sport in Spain. The courses allow for different levels depending upon your goals. If you want to teach competitive chess, you have to master subjects that are clearly defined in the Official Gazette. There are three levels for all sports including chess. To receive remuneration from the State as a chess teacher you should be officially recognised with the title “Sports Technician” (técnico deportivo’) with the specialisation “chess” (ajedrez).

As recognised by the Spanish Parliament, chess can be an educational tool of the first order. The role of the teacher in the educational process represents the vital element which will influence the future generation. There is provision for those who wish to use chess as a pedagogical tool in schools.

FEDA – in collaboration with regional educational authorities – has developed additional courses for teachers regarding didactical methods for teaching chess. The experiences in many different regions of Spain both by teaching staff and teaching assistants have shown very promising results.

These courses are now also available online using learning platforms such as Moodle. These allow learners to proceed at their own pace whilst the trainers can monitor their progress. Great importance is placed on obtaining feedback from the teachers during their training.

What to Do in a Lichess Classroom?

Last week, you saw how to create a Classroom, but what can you do with it?

Fine, now you’ll see all your students listed in the ‘Overview’ tab. There is also information on their blitz-bullet-rapid games, the number of games they played, the puzzles they solved and their activity on Lichess.

Do you want to send them messages or exercises? Click on the ‘News’ tab and ‘Notify all students’ to write your messages or put links to your exercises.

The tab ‘Progress’ is important: you’ll find detailed information on each student’s progress (see ScaryChicken in the example, who lost some points in the Blitz-rating last week). In addition, when you click on the student’s name, you’ll find all information a teacher or coach needs to help them progress. Under ‘Profile’ you have access to all their games and needless to say what you can do with the ‘Message’ tab. Now differentiation within your class group will now be easy!

Anecdote of the Week

No, this is not a new item: we won’t start book reviews in this newsletter, but we would nevertheless like to present you strange book stories.

The first one is a book from the Austrian chess player and author, Franz Gutmayer (1857-1937): Der Weg zur Meisterschaft (the Way to become a Chess Master). Apparently, even if he wrote this book, he probably never read it, as he was never able to become a Master himself. Gutmayer never won first prize in a Hauptturnier (first-class tournament), a requisite for the title of master in Germany.

A lot of stories have been told about the second book Spielregeln für Nicht-Mitspieler (Advice to Spectators at Chess Tournaments). It’s a huge book of over 300 pages, which is completely blank with the exception of one page. In reality, it is only a pamphlet that has a front and back cover, a title page and indeed the page that attracts all the attention: the page that has only two words of advice: Halt’s Maul!! (Keep your mouth shut!!).

For me, the coronavirus has become synonymous with webinars. A real advantage: experts who just walk into my office in my seemingly small village, to deal with fascinating themes. Normally, I would have to spend a lot of money and time on accommodation and transport, now all I have to do is move from the living room on the 1st floor to my office on the ground floor.

The subject of cheating at chess, which was one of the last I followed, was quite technical, but it made me think about the human condition. Are we cheaters by nature or do we become cheaters?

To answer this question, it seems important to know what motivates cheaters. Without being an expert in psychology, I believe one can distinguish three kinds of cheaters:

Personality disorders – some people seek trust, if they have a weak self-image, others, who consider themselves godlike, have a fixed mindset and so winning is the objective. In the first case, the chess player risks being even deeper into the pit; knowing that he only won by cheating. The second player will only see his ego satisfied by winning: a pity.

Laziness – chess is demanding in terms of concentration. The mind has to be constantly on guard because no matter how won the position is, one weak move can mean the end of the game. In most sports, a moment of inattention is not fatal. ‘Comebacks’ are the exception rather than the rule, and a basketball team that leads by 20 points may, through nonchalance, allow the opponent to return up to 10 points without jeopardizing the victory. Not in chess, and therefore, some lazy players let the computer take over…

Self Interest – whether ego in cycling, bribery in football or cheating in chess, money (prizes), prestige (standards) and power (= money and prestige) are important motives.

Whatever the motivation, cheating must stop. Cheating destroys the experience for others: a loss against a player who cheated, a reward that was not accorded, although all the efforts and the chance of first place for a team…. People stop playing chess when confronted with such unfair behaviour on the chessboard. Did you know that the online backgammon world lost almost all its players due to cheating?

Of course, cheating is not allowed by article 11.1 of the laws of chess: “The players shall take no action that will bring the game of chess into disrepute”. Indeed, chess is a noble game. Let us keep it that way, for the game’s sake, for our schoolchildren’s sake…

I’ll express some tips I’ve got from a psychologist on how to react when we see children cheat. We can discuss the ethics. But that is for the next newsletter, unless some interesting experts come to disturb my plans by visiting me in the meantime for some more interesting webinars.

Out of the Box

Again, a challenging problem, which will certainly develop the analytical skills of children (and maybe yours as well?). This time, the abstraction is not aimed to see what will happen, but to ‘see’ what happened.

In the diagram, neither the White King nor Queen has moved during the last five moves, nor has any piece been captured during that time. What were the last moves?

Out of the Box – Answer

This was the position five moves ago:

Please confirm deletion. There is no undo!